she picked him up,

and took him home.

He filled her with new life,

and they held companionable

Poisons devoured him in relentless nibbles,

and the doctor said his only hope

was a healing journey

to a new way of life.

to their skipping stone,

who crossed an ocean and

I felt my father’s

who never missed a moment

of my active life.

along the way, lost sight

of him over the barriers

your mother built between you.

as he was dying, knowing

he had never stopped

loving you, though you

were equally lost to him?

Once you found him,

he slipped into eternity.

As I watch you, so

polished at your work,

on this career high,

Are you still a lost boy?

Or did the chance to embrace him

at the end of his life,

to know how proud he was of you,

as you set him free to fly?

for not meeting me for tea

what kind of father

will you let yourself be?

is one day closer to

when he goes away.

You’re too old for this, my boy.

The day is coming,

when you move south

to live your next adventure.

Get up and face today

because you’re here so briefly

and today is unfolding

I gave you my nose:

a perky nose, not vaguely classic.

I gave you my hair:

the colour, the texture, the volume

so you should keep it

(be nice to your poor balding father,

I gave you my height

I gave you my obsessive nature:

all into the current interest

for as long as the interest lasts.

I gave you my shoe lust

and an appreciation for the unique.

I’m not sure where you got that charm

that drags the ladies to you,

or the way you stretch your dimes

or your athletic discipline.

It’s fun to see your inheritance

blinking back at me from those 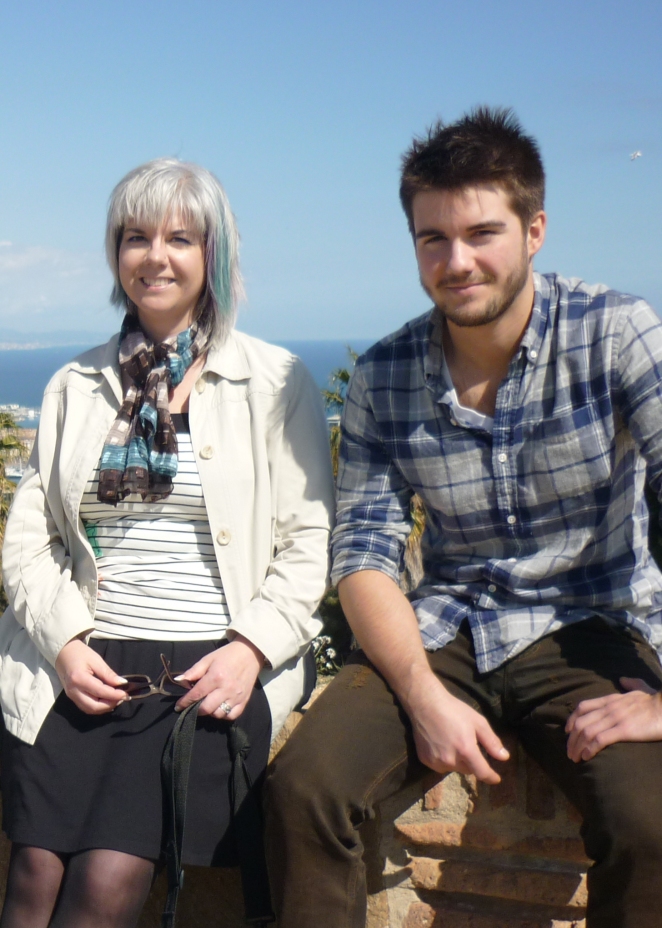 Mother and son on Mont Juic in Barcelona

To a tiny toddling boy

you exclaimed his father’s stupidity

and explained to the

confused face that he was

for his future wife,

blue blanket tucked into your chin,

immersed in the sweet scent of diaper powder.

Body stretched across the mattress,

Toes draped over the edge,

blankets splayed across your waist,

in the pungent scent of sweat.

(Even when they’re men, their mothers see the babies they once held in their arms.)

I recently met a mother and a son who are both writers.  She has years of experience and several books out in various genres.  He studied writing at university, and has a few novels out.   At one event, I asked him how having a successful author already in the household influenced his own ambitions.  He looked a little irritated at my question, and assured me that his work had nothing to do with anyone else but himself.

I felt a bit sorry for him when he said that, because I recognized a common theme of kids struggling to establish identity and break away from their parents’ influence or expectation by adamantly denying its existence.  It is never going to be a simple thing to follow a parent into the same profession or calling.  Comparisons are inevitable.  It seems to me that recognizing and acknowledging the role his mom played in his success would be a natural sign of maturity as a man and a writer.  He could accept the leg up, and then ride the horse with grace, demonstrating his ability and rights to be there.

I watched interactions over the weekend, to see how he handled himself and whether he demonstrated the independence that he vehemently declared.

Despite his respectable literary credentials, he is obviously uncomfortable presenting workshops.  He seems like a shy kid forced to present to crowds of people older than him, and that’s not an easy situation.  He mentioned earlier that he had been worried about this particular workshop.  I had wondered if he had the skill and maturity to pull it together or at least fake it successfully.  People are paying money to hear him and learn techniques.  He owed it to the attendees to be prepared with practical information.

I wondered if his mom would attend his workshop.  I confess, I hoped for his sake that she did not.

He opened with apologies and suggested people go to other workshops because his wasn’t going to be very good.  He admitted to not being ready.  He pulled out his notes, spoke nervously for a few minutes, and then he was stuck.  He had not prepared adequately.  He had some notes, but only about 20 minutes worth.  It’s quite possible to make 20 minutes worth of notes fill an hour, but it takes skill that he didn’t have.  He apologized some more, desperately asking for questions.

His mom watched him fall apart.  She tried to help.  She asked him questions that he should have been able to answer and that would have filled five or ten minutes if he’d picked up on her hints.

He grumbled at her in typical kid fashion.  The audience laughed, recognizing a familiar family dynamic.

He provided a weak answer, one that was almost contrary to fact.  She couldn’t let that lie.  She had to add, “Don’t you think that…” and then she provided a fascinating and informative few minutes.  He was irritated that his mother was speaking in his workshop and grumbled at her some more. “You are a bad audience member!”

To be fair, for the period of time when he was presenting the information that he had in his notes, he was amusing and informative.  While he was floundering, the audience was forgiving and pleasant with him.   He obviously knows his material, he just didn’t have enough material, or hadn’t figured out how to properly expand it enough or analyze it enough to fill his allotted time.  He looked a lot like he was roasting on a spit.

What I found most interesting, however, was that by-play between mother and son.  It was a clear example of rejecting opportunity.  Being truly independent means you are not afraid to take advantage of the tools at your disposal, even if you hate that your greatest asset is your mom.

I felt sorry for him.  He seemed like a mortified introvert, forced to do something that was painful for him; however, an appearance of confidence and capability is important when people are spending money to learn from you.  You have to make your audience feel like it’s received value.

Sometimes apologies happen at the start of a presentation, then the nerves pass and the presenter gives value.   That didn’t happen in this instance.  I felt sorry for him, and I thought I knew how his mother was feeling: knowing that she could have have helped.  He was determined to fall by himself, and he did.  Such moments are painful for mothers!

I hope he is able to come to terms with his advantages and his skills, while developing the ability to schmooze with the public in order to promote his work independently.

A very tired mother (me)  at the end of SIWC and a confident, capable son who came to visit before she went home.

I got thinking about those mother son relationships.

My own son lives 6 hours away, and we don’t get to see him as often as we’d like.  He is much younger than the young man who was presenting workshops, but he is much older in many ways.  As a teen he went through the stage of believing that being independent meant he had to live far away and refuse help from his parents. He did not achieve many of the goals we had set for him, but he forged his own path.  As a result, he has been completely financially and emotionally independent for several years.  He markets his skills.   He knows how to behave with clients.  He is aware of his appearance and the need to present a professional image, albeit a youthfully hip one. He exudes confident capability, as he schmoozes and charms like a pro, despite his youth.  It takes effort to look as relaxed and stylish as he does.  It takes experience and practice to be confident in himself when teaching skills to others, often older than he is.  I like hearing  that my son acquits himself admirably in those situations.

I kind of wish he’d been presenting workshops.  I think if he’d stepped to the podium, the audience would have been enchanted, entertained, and informed by a confident, thoroughly prepared young man.  No one would have been embarrassed.