poem-pudding on the premier September 4, 2014

“Who stole the bowl of pudding

I made for dessert?”

“He did!” said the chocolate coated child, pointing at

her baby brother, quietly kicking his feet in the jolly jumper.

“Who is stalling contract

“They are!” said the chocolate coated premier, pointing

at the teachers quietly carrying their pickets.

are easier to spot

(Seriously Premier, why would anyone forfeit thousands of dollars of salary unless it was for something of tremendous value- like defending The Charter of Rights and Freedoms? We’re not going to give up our rights under the law!  We won twice at the Supreme Court!   We won’t sign a clause that says if you lose again, you won’t have to follow the justice’s decision!

who was the teacher

Who was the teacher

who shredded your confidence,

made you feel powerless,

you sustained a deep hurt

that is still a festering wound,

that causes you to lash out

deflecting your pain with today’s power.

there was a hurt,

that we are paying for.

It’s just a theory.  But it would explain a lot.

Chris has the most beautiful garden in the city.  He has a gardener who has been working on it for years, carefully cultivating special plants, and creating special features that are the envy of people who come from all over the world to admire the garden.  The gardener is paid a fair salary for his expertise and years of training, so he is happy.

Years pass.  The gardener hasn’t had a raise in years, and things are getting more expensive.  Gas for his car now costs double what it did when he started working.

Chris asks the gardener to put in a fancy water feature, and several fruit trees. “I’ll cover the bill when rents are paid,” he says.  That’s fine, the gardener makes a good wage, and he loves the garden.

Chris goes around to his tenants to collect the rents.  To the small houses, he says, “The view improved now the neighbour’s tree is down.  You owe more.”

To the really huge houses, he says, “Never mind. You don’t have to pay your rent.”

Then he pays all his bills, but because he didn’t make the big houses pay their rent, he doesn’t have enough to pay the gardener all he’s owed.

Chris tells the gardener he still expects the fancy water feature and the fruit trees, as well as the lawn to be mowed, the beds weeded, and the shrubs pruned.

The gardener loves his garden: the new water feature is going to be stunning when he’s finished with it, and the fruit trees are amazing, blooming gloriously, but some fungus is creeping onto the petals, and then insects are bothering the fruit.  He can’t quite figure out how to stop that, but he’s read about a great fungicide that should work.  He just needs to test to see exactly what the problem is.

“I don’t have any extra money for this!” Chris declares.  “I pay you enough!  Your demands are ridiculous!”

The gardener wants his garden to be perfect, so he does his best, working in the evenings and bringing things from home.  He can’t afford to subsidize the proper fertilizer, tests, and fungicide, and when the mower runs out of gas, he can’t get more fuel  since he no longer can afford a car himself, so he can’t drive to get some.  He asks for an increase in his wages, and a budget that covers the demands Chris as made.

“This is not in line with what other gardeners are paid!” Chris shouts, though the gardener knows he is not asking for anything more than every other gardener in the city gets for the same kind of garden.

He begs Chris to please provide him with the budget necessary to do what he’s been asked, but Chris glowers and tells the gardener he’s being greedy and lazy.

The gardener tries repeatedly, feeling guilty about the way the fruit trees are dying, and he is frustrated because he knows if he could just get the proper funding for what is required, he could produce the kind of show garden Chris he wants.

With so much work, no extra staff, no supplies and not enough money to buy them, the garden inevitably falls into ruin.

“What a terrible gardener!” Chris says.  “I’m going to take back pay because he’s not working hard enough!”

“What a terrible gardener!” his golf club cronies in their rent free big houses agree, adding.  “It’s so hard to get good help cheaply any more.” Then they shout, “FORE!” as their golf ball sails over the artificial turf and the plastic flowers of their golf course.

In case you missed it:

Chris is Premier Christy Clark, the garden is the education system, and the gardener is the teachers.

“Why are teachers even bothering to picket,

when you aren’t getting strike pay any more?”

I told him it was because teachers are moralists

who are defending democracy

against a corrupt government:

A government that ignores the court rulings

judgments by the Supreme Court

and the United Nations saying they

are WRONG to steal from our kids.

It will pay billions for a stadium roof,

but will not pay for educating its children.

I told him that in such a war,

pay is a small thing.

We will fight, because if our government

succeeds in destroying OUR union

then every other working person in this province

If OUR contracts can be shredded with impunity,

We are fighting for YOUR rights

and for our students’ right to a properly funded education

against a government with an agenda

to destroy public education and the middle class.

We’re fighting for YOU! I told him.

because I belong to a union,

and somewhere in the province

my strike day was yesterday,

but I am fined today anyway.

A government that has twice

been told by the courts that

its actions are illegal,

that it bargains in bad faith,

that it tries to provoke problems,

simply ignores the judiciary’s order that it owes teachers

ten million dollars it took from them illegally.

continues to bully its educated citizens,

Setting its propaganda machine in motion.

Sure that no one will believe what it is really doing.

Why is the public not up in arms?

Why are they not concerned

to see a government stripping rights

so it’s easy to manipulate them?

because someone else is demanding the justice today

that I marched for yesterday.

our boys were fighting against

They are likely turning in their graves

at the new chancellor

who avert their eyes,

pretending not to see,

and mutter, “At least she’s not after me.”

I have just returned from my first We Day. 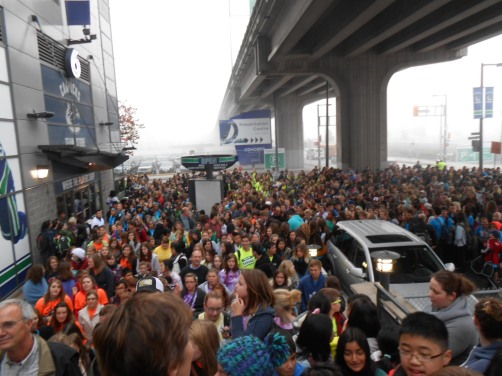 If you haven’t heard about this amazing event, it’s put on by Free the Children, a non-profit for kids to help other kids, founded by Craig Kielburger when he was just 12 years old.  The concept is that kids want to help others, and that they can gather together and make a difference in the world.

We Day is basically a HUGE pep rally, rewarding schools/groups for their contribution to the cause.  You can’t buy a ticket.  You school earns the opportunity to attend through its fundraising for Free the Children’s many projects around the globe.  20,000 kids and teachers from across BC attend.  It presents a variety of causes that kids can support, a few musicians kids love, a few amazing speakers, and a few corporate messages from the folks who pay the bills.

Attendees were addressed by Kofi Annan, retired head of the United Nations (who was once mistaken for Morgan Freeman while on holiday at Lake Como), Martin Luther King III who has his father’s gift of oratory, and Hon. Romeo Dallaire retired lieutenant-general, author, and senator.  Very impressive.

Attendees were inspired by speakers like Spencer West, a double amputee who climbed Kilimanjaro on his hands, who speaks about overcoming the impossible, and Molly Burke who went blind in her teens and speaks about bullying.  Very inspiring.

The kids were entertained by the Kenyan Boy’s choir, rap group Down with Webster, the band Hedley, and Avril Lavigne.  (Down with Webster seems like a very negative kind of name for an inspirational band, but I’m old and crotchety).

The kids were presented with a variety of causes they could support: education, building schools, rights of women, child anti-slavery, anti-violence, environment,, clean water, anti-bullying.  Leadership students were challenged to bring these causes to the attention of their student bodies, and make a difference by raising money to support various projects through bake sales, something-a-thons, etc.

The kids were pumped.

This was an event filmed for TV and we could see the tele-prompters and timers from our seats.   I was disgusted with the politicians who presented- the mayor of Vancouver went over time by a minute and our premier, Christy Clark, was over by more than 3 minutes.  She just turned away from those double zeros flashing that she was over time and continued rambling away.  It was clear she hadn’t properly prepared. Considering that none of the major speakers went over, it just shows how disrespectful the politicians are of the audience, the promoters, and the event. Very unprofessional and obnoxious. (The aboriginal blessing went over by a minute, too, but you can’t rush sacred ceremony).

I was a little put off by the corporate nature of it all.  The major sponsors- phone company, bank, newspaper- all spoke, included things in the goodie bags that marketed directly to the kids, through apps, etc.  “Pull out your phone and tweet this!” They were encouraged.  “Download this app right now!”

We really must teach our kids that nothing is free, and if you’re not paying, you’re the product being sold.  There was also a lot of waste generated on very cool gizmos and gift bags.  But everyone likes goodie bags, right?  I kind of liked the seed permeated paper leaf that will become a tree if I plant it in my yard…

One student who’d been to the event in the past and had chosen not to attend this time, told me that he wasn’t going this year, because he’d felt like he was inside one of those info-mercials about the starving kids.  He said he wanted to talk to me when I got back to see what I thought.  I think he has a point. 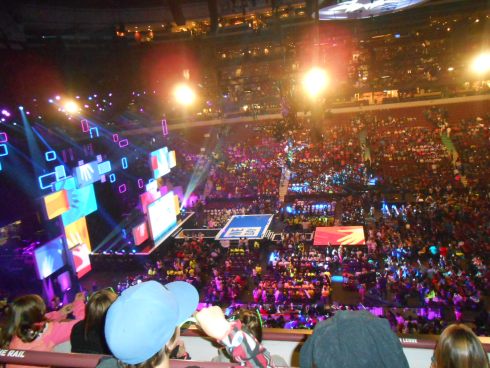 It was a slick, high tech production.  Hearing loss from those not wearing ear plugs was likely.  I couldn’t make out the words of any of the musicians.  But…

Did it motivate kids?  Definitely.

Are they making changes that will bring about good in the world?  Well, hopefully they’ll remember  that their daily decisions make an impact and choose to be kinder to each other and their environment.

They’re kids.  They’re narcissistic and altruistic in the same hand.  It’s hard from them to go from Me to We.

Exposure to the message that they are the future, and that they can seize opportunities to improve their world can’t hurt.