I meet the most interesting people.

After the banquet at When Words Collide Writing Conference in Calgary tonight (I’m there as a presenter) I was sitting cross legged on the floor in my long skirt, when I looked up and spotted two young, tall, handsome red headed men.  (The hair was quite glorious, though not discussed).  We smiled at one another and I asked, “Anyone ever tell you that you two could be brothers?”

They laughed and commented that they got that all the time.  I asked who was older and Nathan pointed at Alex.  “He is, by 8 minutes.”

I asked what school they went to, and learned they’d just graduated, but that next year, one is going to do another year to learn art, music, and sewing.  The other is going to university with the aim to become a neuro-surgeon.

Conversation carried on a bit, and Nathan asked what kind of music I listened to.  I told him I play the harp, and so I like folk and Celtic music.  He told me he really likes Goth Cabaret, but that “you’ve probably never heard of it.”  I was intrigued,because I hadn’t..  He went rifling through his iPad in search of examples.  Finally, he gave up, and said, “I’ll just sing you one.”  He sang a verse of a song and then stopped, because he couldn’t remember the rest.  He had a discussion with his brother, and then the two of them turned to me and launched into a tuneful rendition of “When You’re Evil” by Voltaire.  Alex even dived into a lovely deep bass.  They sang the whole, four minute and something song, with perfect intonations and accents on the funny bits.

I had a personal concert in the corner of a crowded foyer. A hundred people were milling around us.  Everyone else was conversing or checking their phones.  I had a moment of pure delight being entertained by a pair of talented eighteen year olds.

It was the highlight of the day, and perhaps the weekend.

Just to share the fun with you, here’s a Youtube video of the song.  Though not sung by Nathan and Alex, I can assure you, it’s pretty close!  It’s  a little ‘Sweeney Todd’ style mayhem in a jaunty cabaret tune.  Delightfully dark.

You never know what’s going to happen when you talk to young folks.

And here I am with these delightful young men.  Nathan on the left, Alex on the right. 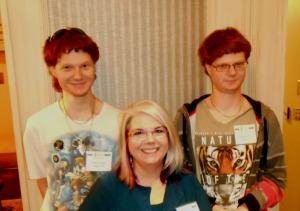