As previously mentioned, counter-surfing requires stealth, balance, and ingenuity. OJ leaves us baffled on a regular basis. We have no idea how he does the things he does. I have heard it said that poodles are so intelligent that they are frequently the ones who train their owners. The dog books say unintelligent people should probably avoid owning poodles. My husband and I have university degrees and respectable IQs. You’d think we’d be able to keep up with a dog.

.
OJ loves soup. His favorite is Campbell’s Butternut squash soup. This is how I know.

.
Last year there was a sale on Campbell Gardennay soups. I had considered purchasing them several times in the past, but had thought they were too expensive. At three for six dollars, I was finally willing to try them. I purchased three different soups: Summer Asparagus with Sweet Basil, Fire Roasted Red Pepper and Tomato, and Butternut Squash. I put the three tetra-bricks into my pantry on the pullout wire drawer. I already had two generic soups in tetra bricks in that drawer and I added the three Gardennay soups behind them. I was particularly keen to try the Butternut squash, since that’s my favorite Tim Hortons soup.

.
A couple days later, I came into the living room to discover a strange silver rectangle on the living room floor. It looked like a chunk of metal. What was it? I leaned over to investigate. OJ jumped off the couch and sauntered nonchalantly down the hall.

.
I picked up the weird silver thing and turned it over to study it with confusion. Formerly it had been a Gardennay tetra-brick. Now it was a perfectly flat, absolutely clean silver rectangle. There were no chew marks. You would swear he’d taken a pair of scissors and cut the box open down the seams. There was no so 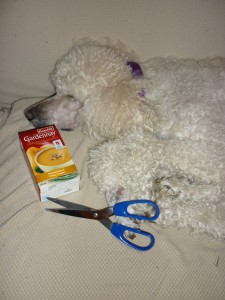 up anywhere. Floors, couch and dog pillow were all clean. Of course it was my Butternut Squash soup. Damn freakishly talented counter-surfing dog.

.
I went out shopping later, and bought another three soups.  This time I bought two Butternut Squash boxes, muttering at OJ the whole time. At home, I tucked the soups in the pantry, setting the two Butternut Squash boxes at the very back of the drawer. Whoever took this soup out was going to have to pull out the drawer. OJ can’t open the door to the pantry, thank heavens. He can’t pull out the drawer. I cooked up a pot of  Butternut Squash the next day.  It was excellent.  I ate it all, and did not leave the pot unattended. I savoured the idea of the second box waiting for another day.  OJ lay covertly on the couch, plotting while he pretended to be sleeping.

.
It wasn’t even a week later that I walked into the living room to see a familiar silver rectangle sitting reverently on a dog pillow. The pantry drawer was closed. I pulled out the drawer. The soups were all present and accounted for. All but one.

He’s also good with other fastenings, as you will read.

What do you think? Cancel reply